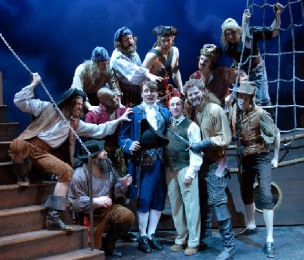 The story of a boy who has to find meaning in his life, who has to grow up and become a man, this version of Robert Louis Stevenson’s classic is an epic musical in the spirit of Les Misérables.  It recounts the adventures of Jim Hawkins and his coming of age with the help of a motley crew of pirates and a quest that tests his spirit and his courage. Originally a fifty-minute children’s theatre musical, Robin and Clark have created a colorful, vibrant, full-scale Broadway family show with a lush score, unforgettable characters, and plenty of dancing, singing, and action to delight every audience.

It took two extremely talented creative artists both at the top of craft to get me to take a 3 hour, 160 mile ride! I was not disappointed with Treasure Island written by Marc Robin and Curt Dale Clark. This is a gem of a new musical . . . a major triumph with a grand future offering a sophisticated tale ripe with pirates, excitement, buried treasure, ships and distant shores peopled with richly developed characters . . .Robin and Clark are terrific storytellers true to the novel’s essence enriching their musical with humor, suspense, action, and loads of heart. Treasure Island is an adventure musical with a strong coming of age male bonding theme sparked by an unlikely friendship. Action and adventure fuel this tuneful musical.– Tom Williams, Chicago Critic on Beef N Boards 2009 production

Click here to listen to an audio excerpt from Treasure Island: Jeff Dumas sings “Look at Me.”

Click here to watch an excerpt from the Fulton Theatre’s world premiere of Treasure Island in 2008.

Click here to watch an interview with Marc Robin and Curt Dale Clark before the world premiere in 2008: